How to do web searches without being tracked 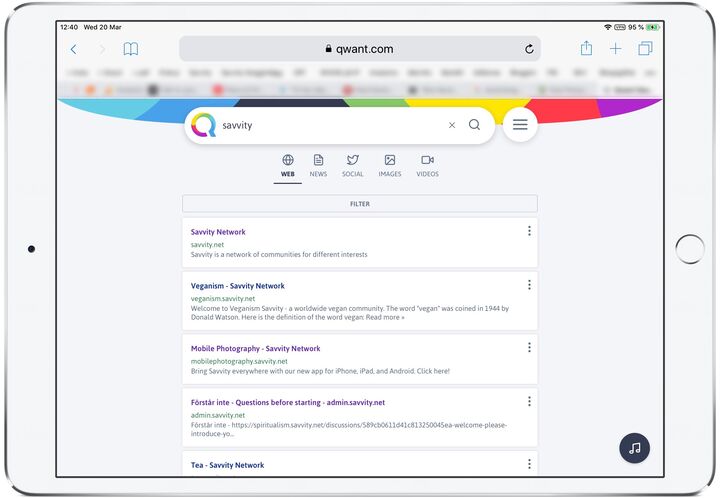 If you are like me and almost everyone else on the planet, you use Google to search the web. It has been the best search engine since it was released 20 years ago. Google’s motto used to be “Don’t be evil.” Times change and now they no longer use that motto.

I don’t like that one company more or less have a monopoly on web searches. The other day I listened to a podcast interview with Margrethe Vestager, the European Commissioner for Competition. She is responsible for fining Google over antitrust violations, among many other things. She said she mostly use a European search engine named Qwant. I had never heard of it, but looked it up and was pleasantly surprised. They seem to be very concerned with privacy.

In their philosophy description they state that respecting privacy and ensuring net neutrality and impartiality are their cornerstones. They even have a search engine version adapted for children.

Qwant works on all platforms, and they have smartphone apps. Try it out:

Have you heard of Qwant before? Where? What do you think of it?

How can you be sure they follow their philosophy though?

Never heard of Qwant before. Will try it out, both at work and at home.

#1: The first thing you can do, if you know how, is check what scripts they use on their website. I think it's hard, if at all possible, to get someones personal information without it being traceable. That means you can ”sniff” the traffic to and from your computer and see what they collect.

Another thing you can do, is read their website. They seem to be very open with what they do. Also, they have a solution for using their search on different devices, with the same settings, without creating a user account.

Their whole business rests on privacy for users. Stakes would be high for them to break that trust.

#2: Neither had I a week ago. Now I'm trying to use them as much as possible. At the moment I explore the possibility of initiating search with Qwant from the search bar in iOS. Not yet sure if it is possible.

#3 Thankyou for your answer! Having now used Quant for a bit longer, how would you compare the search results with that of Googles?

It seems that the following 4 search engines are available in spotlight search: Google, Yahoo, Bing, and DuckDuckGo. Hopefully, the list will be extended with Qwant in the future? DuckDuckGo is also said to respect your privacy.

#5: Comparing search results without comparing the same searches is a little tricky. That said, so far I haven't missed anything in the results I get from Qwant. One of the things I like best is the fact that they don't sort results based on me. This means a search I do will yield the same results as that of someone else searching for the same thing.

#6: I don't expect Qwant to be among the choices in Spotlight any time soon. All four present now are based in the US. It could be a coincidence, but perhaps not. I think Qwant themselves could do things to be more accessible. If they added Siri Shortcuts functionality or URL schemes for instance.

Interesting reflection! I did not think of the locations of the different search engines.

There is a desktop Safari extension for Qwant: